Emergency Response Service to quickly support our customers during security-related emergency cases.
If you are in an emergency situation, please contact us now [Cyber Emergency Center]

For inquiries by email

If you are in an emergency situation, please contact us now [Cyber Emergency Center]

For inquiries by email

Tokyo, Japan - March 19, 2015 - LAC Co., Ltd. (Tokyo Stock Exchange/JASDAQ: 3857), a leading company in cyber security services in Japan, published its English version of Research Report on Advanced Persistent Threats in Japan on March 19. This report presents the results of analyses performed by Cyber Grid Japan based on information that was obtained by LAC's Cyber Emergency Center through its responses to emergencies and its investigations into data breaches. It is the first technical report published in Japan on the results of research and analysis into some 80 Advanced Persistent Threats (APTs), which are highly skilled cyber-attacks targeting specific companies and organizations, that occurred in Japan. 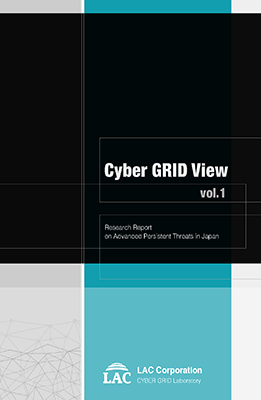 An example of the APT cyber-attack method was the covert attack on Google, Inc. reported by the media in January 2010 and that attracted global attention. Unlike conventional attack methods that spread computer viruses randomly, an APT is carried out using viruses that cannot be detected by existing anti-virus software. In Japan as well, companies and government organizations were reported to have fallen victim to APTs during the second half of 2011.

As a leading company in information security services, LAC operates the Cyber Emergency Center to provide emergency support in the event of a security breach. Since we launched our services as a computer incident specialist organization in 2004, we have dealt with nearly 1,000 cyber emergencies. In recent years, the Cyber Emergency Center has been asked to conduct investigations into increasing numbers of APTs. As a result, we have made considerable progress in the technological analysis of such cyber-attacks.

Established in 1986 for a system development project, LAC is a leading cyber security company that launched security services in 1995 for the first time in Japan. As a result of a business merger, the company was restarted as LAC Co. in 2007. LAC provides a wide range of security services, including: vulnerability analysis services supported by a proven track record; security monitoring/analysis services by JSOC, one of Japan's largest security monitoring centers, available 24 hours a day throughout the year; as well as Cyber Emergency support services that provide response and support in the event of a data breach and other emergencies. In addition to these, the company also offers total IT solution services - including system development services that originated from the development of platform systems for financial institutions - to government agencies, companies, and other organizations. As a security service provider, LAC has over 7,300 enterprise customers and 800 government customers in Japan.